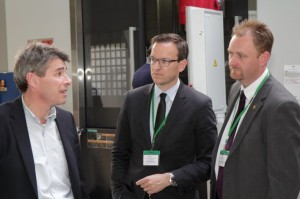 In the month of May 2013 the CEO of the DAMRC Klaus Bonde Ørskov together with Brian Moran, Vice President in Boeing Northern Europe visited the AMRC at the Sheffield University, in order to discuss the future possibilities of cooperation and to gain inspiration when establishing the DAMRC test-facilities. The AMRC was at in the year 2010 one of the 12 founding partners of the DAMRC.

The DAMRC and the AMRC have through the last 3 years collaborated on both optimization projects in Danish manufacturing companies as well as educational courses for Danish technicians and engineers. The AMRC have since their founding at the millennium experienced a remarkable growth. Thus the English AMRC is today employing 250 highly educated employees and has a yearly turnover of 180 Mio. DKR. The turnover is equally divided between contributions from industrial companies, the English government and public research funds.

AMRC can document their contribution to creating at least 1600 industrial jobs within the local industry and especially from the year 2009 and till today the AMRC has experienced a growth with a threefold of the activities. This underpins the fact that R&D centers of this kind can expect an exponential growth when the foundation first is set. With the establishment of the DAMRC test-facilities, new interesting possibilities of collaborations between the DAMRC and the ARMC are present in the future.

This website uses cookies to improve your experience while you navigate through the website. Out of these, the cookies that are categorized as necessary are stored on your browser as they are essential for the working of basic functionalities of the website. We also use third-party cookies that help us analyze and understand how you use this website. These cookies will be stored in your browser only with your consent. You also have the option to opt-out of these cookies. But opting out of some of these cookies may affect your browsing experience.
Necessary Altid aktiveret
Necessary cookies are absolutely essential for the website to function properly. These cookies ensure basic functionalities and security features of the website, anonymously.
Functional
Functional cookies help to perform certain functionalities like sharing the content of the website on social media platforms, collect feedbacks, and other third-party features.
Performance
Performance cookies are used to understand and analyze the key performance indexes of the website which helps in delivering a better user experience for the visitors.
Analytics
Analytical cookies are used to understand how visitors interact with the website. These cookies help provide information on metrics the number of visitors, bounce rate, traffic source, etc.
Advertisement
Advertisement cookies are used to provide visitors with relevant ads and marketing campaigns. These cookies track visitors across websites and collect information to provide customized ads.
Others
Other uncategorized cookies are those that are being analyzed and have not been classified into a category as yet.
GEM & ACCEPTÈR